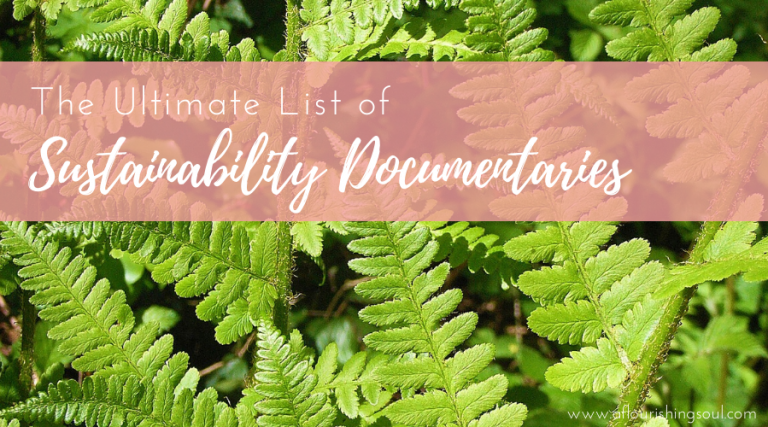 I absolutely love watching documentaries. They’re a great way to dive deep into issues and learn about pretty much any topic under the sun.

However, it can sometimes be difficult to find good documentaries. I oftentimes spend 15-20 minutes just searching for something to watch! In an effort to help you avoid this, I’ve decided to make a masterpost of the best sustainability documentaries.

I’ve compiled a list of the best sustainability documentaries I’ve watched, broken them down into categories, and summarized each to create a comprehensive resource.

Unless otherwise noted, I’ve watched every documentary on this list and recommend it to anyone interested in learning more about sustainability. I’ve also included where to watch the documentaries online if the option is available.

I’ll continue to update this post as I watch more, so be sure to check back for new titles.

And now, onto the list of the best sustainability documentaries! 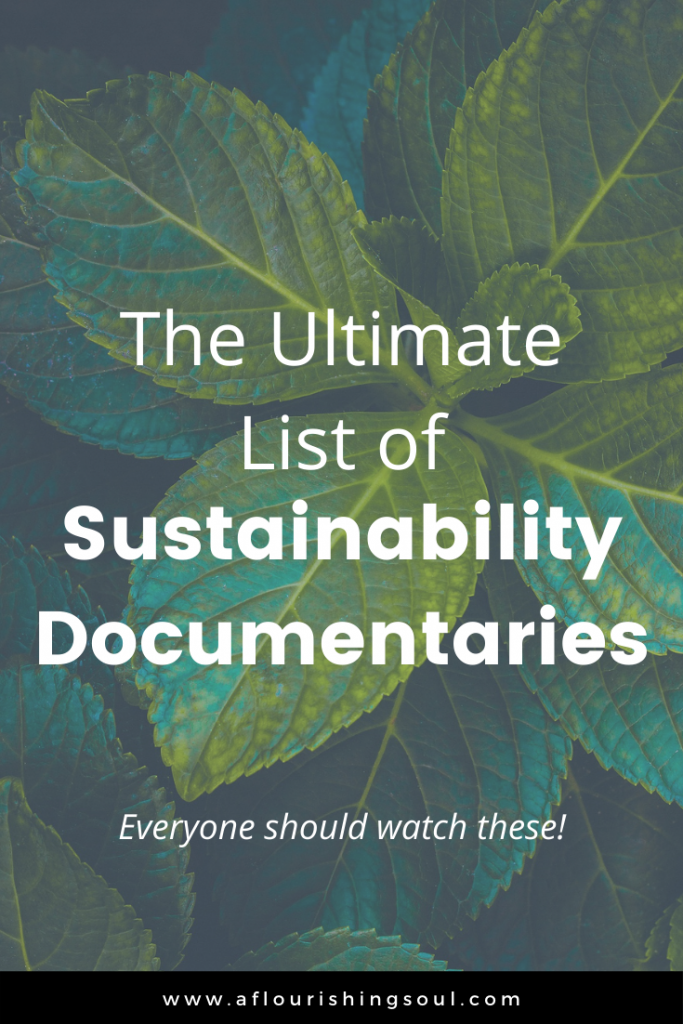 Chasing Coral follows a team of divers and scientists as they attempt to capture coral bleaching on camera. The composition of this documentary is beautiful and really helps to drive home the seriousness of the situation. The evidence of coral bleaching they capture shows just how devastating climate change is for our oceans. I found myself getting very emotional while watching this documentary, but I think that’s a good thing. It’s a heartbreaking situation and they mange to convey it perfectly.

This documentary showcases one example of the consequences of climate change. Survivors of the 2018 Paradise California Campfire Wildfire share their stories from that day. At times it can be hard to watch, but it puts the reality of the climate crisis into perspective.

Broken highlights issues in various industries today. It was super interesting and I hope they make another season of this show! Two specific episodes I’d recommend are:

This documentary has been on my watch list for years and I’m so happy I finally sat down and watched it. It exposes the reality of the fast fashion industry and just what goes into the production of our cheap, “disposable” clothing items. Slave labor, economic bias, environmental impacts, and more are all discussed. I truly believe this is a must-watch for anyone interested in sustainability and ethical consumerism, as so much is covered in the film.

This cult classic documentary exposes how SeaWorld mistreats their captive animals. This was very eye opening for me and changed my perspective towards establishments like SeaWorld when I first watched it many years ago.

Similar to the famous Planet Earth series, Our Planet shares breathtaking videography of nature’s most remarkable events. I love the sustainable twist that has been put on this series, though. It really encourages viewers to consider the effect their actions are having on “our planet”

I’m fairly certain everyone has heard of the Planet Earth series, and for good reason. If you’re in the mood to immerse yourself in the wonders of nature, this is the show for you.

The World’s Most Wanted Animal (Netflix)

Pangolins are an animal poached for their scales, which are considered medicinal in traditonal Chinese medicine. Little is known about these creatures other than that they are extremely endangered. This documentary follows Maria Diekmann as she attempts to document the life of these creatures and share their story.

This documentary highlights just how pervasive plastic is in our oceans. By diving into the the detrimental impacts plastic has on the health of both humans and animals, this film is able to make a strong case for why plastic is bad.

Mission Blue shares the inspiring life story of Sylvia Earle, an ocean botanist who paved the way for female scientists. She’s a fascinating woman and I learned so much about the health of the ocean through this documentary.

Forks Over Knives shares the amazing effects of a plant-based diet on ones’ health. This documentary isn’t produced from a sustainability standpoint, but reducing your consumption of animal products is a good way to reduce carbon emissions. The health benefits highlighted offer a compelling argument for why we should eat more plants.

I LOVED this documentary! If you’re looking for an introduction to food waste, this is the show for you. Filmmakers Grant Baldwin and Jen Rustemeyer challenged themselves to eat exclusively food waste for six months and documented the entire experience. The amount of food waste they uncovered was truly shocking.

The style of this documentary is super approachable and engaging. Whether you’re new to the sustainability space or have been here for a while, I believe you’ll find the information presented in it to be valuable.

This series is so good! While Rotten isn’t exclusively about sustainable food topics, there’s several episodes that cover these issues. I’d specifically recommend the following:

While these three episodes specifically touch on sustainability and ethical issues, I’d highly recommend watching the entire series. I learned so much from every episode.

This documentary is wonderful! It follows farmer Marty Travis through a full year’s worth of seasons on his farm while telling the story of how he transformed the farming community in the Chicago area. By overhauling a failing system, he was able to build relationships and create a sustainable agriculture movement that benefits everyone.

The reality of our waste system is shocking and Trashed aims to document it. It covers topics such as landfills, incineration, recycling, and plastic pollution and shares just how devastating these things can be for our world. This isn’t a hopeful documentary, but it conveys just how out of control our garbage problem really is.

After buying his daughter a pair of pajamas with an overwhelming chemical smell, Jon Whelan set out to discover what was in them. When the company refused to tell him, he decided to make this documentary to show just how many toxic chemicals are hidden in products we use every day.

The Devil We Know (Netflix)

Teflon is a popular chemical used to make non-stick surfaces. It’s also highly toxic. The manufacturer, DuPont, knew but still decided to produce it. The Devil We Know shares the stories of people who were impacted by the production and irresponsible disposal of Teflon and it’s byproducts.

I hope you enjoy these recommendations. Be sure to comment any sustainability documentary suggestions you have down below and pin this post for later! 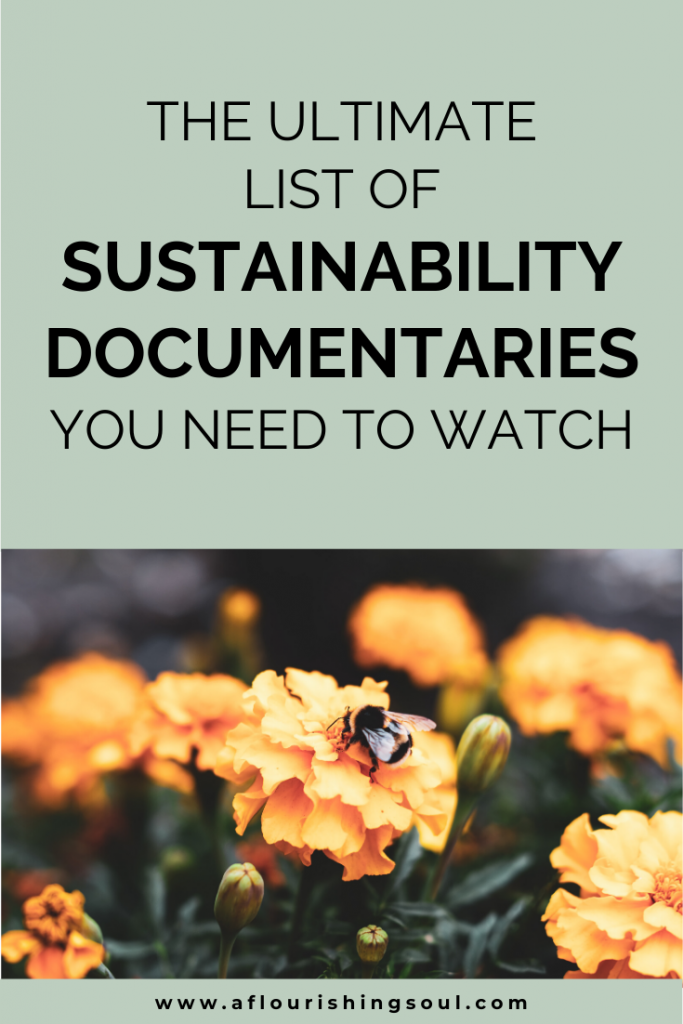 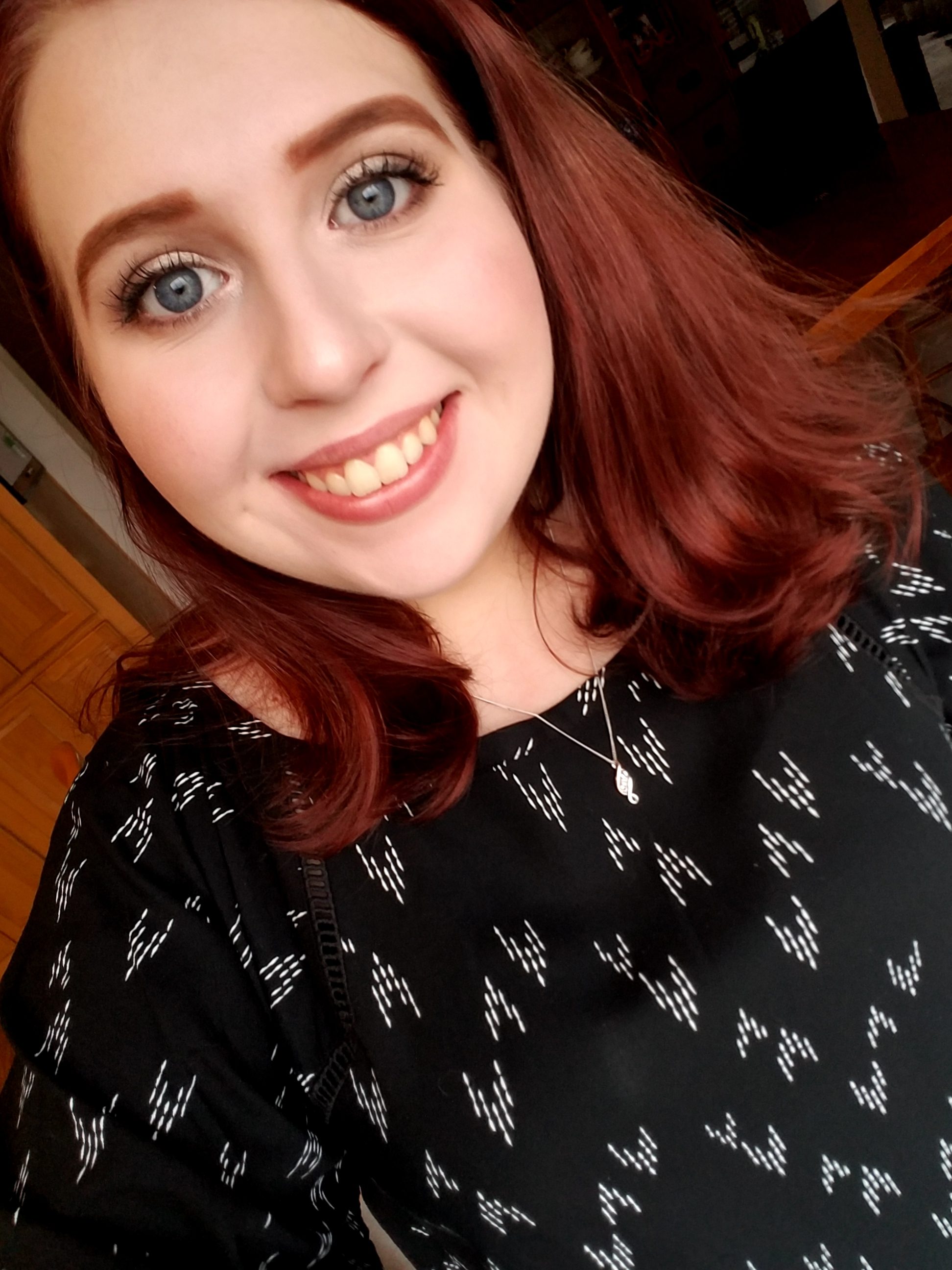 Hi there! My name is Rachel and I'm the face behind A Flourishing Soul. I'm so excited that you're joining me on my journey to wellness for the mind, body, spirit, and planet. Check out my About Me page for more info!

This website uses cookies to improve your experience while you navigate through the website. Out of these, the cookies that are categorized as necessary are stored on your browser as they are essential for the working of basic functionalities of the website. We also use third-party cookies that help us analyze and understand how you use this website. These cookies will be stored in your browser only with your consent. You also have the option to opt-out of these cookies. But opting out of some of these cookies may affect your browsing experience.
Necessary Always Enabled
Necessary cookies are absolutely essential for the website to function properly. This category only includes cookies that ensures basic functionalities and security features of the website. These cookies do not store any personal information.
Non-necessary
Any cookies that may not be particularly necessary for the website to function and is used specifically to collect user personal data via analytics, ads, other embedded contents are termed as non-necessary cookies. It is mandatory to procure user consent prior to running these cookies on your website.
SAVE & ACCEPT